Hot for Teacher and the Great latch On

Femina Potens and Slut Walk SF proudly present August's installment of Sizzle, the monthly award-winning spoken word and performance series. Sharpen your pencils because this month at Sizzle we are back to school to learn more about health awareness for our queer, kinky and sex positive communities.
If you never had a crush on your teacher- you are about to! We are inviting the Bay Area's best and brilliant sex workers, porn performers, writers and sex-educators take over the classroom. You will be hanging on every syllable as curvaceous courtesan Kitty Stryker explores a healthy perversatility through spoken word. Get your sex hacked hard with Maggie Mayhem as she shares her self proclaimed "sex-nerd" side. You are going to want to be teacher's pet for Maxine Holloway's interactive presentation on safer sex practices within the kink community. Be sure to have a front row seat for Madison Young's well rounded performance about breast health, Adult performer, Holly Stevens, will be joining us to discuss early breast cancer detection and discussing her first hand battle with breast cancer. Video PSA's by pioneer performer Buck Angel and queer porn heartthrob Drew Deveaux. Also our good friends at Slut Walk SF will be joining us with a presentation that is not to be missed addressing abuse & rape in our communities and how we can protect and stand up for one another. Raffle prizes have been donated by such amazing sex positive entities as Good Vibrations, Feminist Porn Network, and Annie Sprinkle to help benefit Holly Stevens'.
Sizzle’s performances regularly reveal the bravest, hottest, most eclectic performers that the Bay Area has to offer and this evening is no different. Learn all the things they wouldn’t teach you in health class in this evening of raw, radical, and raunchy wellness.
Located at Viracocha - 998 Valencia Street. Get Tickets Today!
Posted by Madison Young at 2:36 PM No comments:

Posted by Madison Young at 5:49 PM No comments:

Email ThisBlogThis!Share to TwitterShare to FacebookShare to Pinterest
Posted by Madison Young at 5:47 PM No comments: 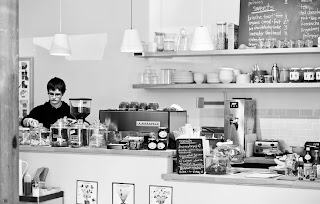 Just found out about this cafe in Hayes Valley. Think I'll have to pay a visit and check it out.

They feature art shows, workshops, daddy's groups, baby sign language, and the cafe is run by a child psychologist. I ran into the owner's partner at another cafe this morning while I was out with my 5 week old girl, fetching my morning coffee. They seem like really nice folks and they serve 4 Barrel Coffee which is my favorite here in SF. Might be a great place to have the Sexy Mamas Social Club meet.
Posted by Madison Young at 2:12 PM No comments:

Blogs and Web Sites to Check out 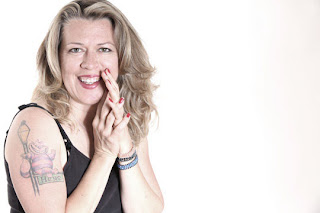 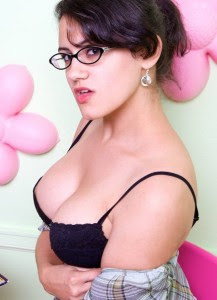 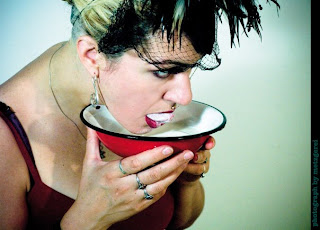 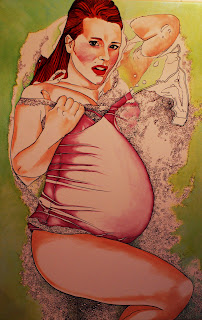 Biological Clock is an experimental inquiry into the boundaries and
potential of using art as a cultural catalyst, community as an
intentional imaginative reality editor, and social constructions
around time as an equalizer and integrator of multi-stable identities.
The goal of the artist is to test the borders between choice and
chance, art and life. Sadie will erode the perceived boundary between
embodied sexuality and motherhood. She intends to attempt impregnation
in the way that feels most holy, interesting, loving, appropriate,
community-engaging and self-actualizing to her at this time: in art,
unflinchingly and with pleasure.

Biological clock has been a long-spanning project with multiple
manifestations other than the generative performance to come. In
preparation for motherhood and in service to this project, Sadie has
carefully tracked her reproductive cycle, performed fertility rituals,
posed for a motherhood related photography series, collected
sound-based media, and diligently sought out sperm donors and seminal
collaborators. Sadie has also interviewed people in the U.S. and
Europe as a way of working through the barrage of questions and
interrogations to which she is subjected regarding her means,
intentions, abilities, and motivations when others try to reconcile
her motherhood desires with the fact that she is a queer, single,
sex-working, low-income, artist. She has also commissioned other
artists to alter or produce clocks representing 12 types of time,
which are constituents of her own biological clock. These clocks will
be on view during the entirety of the Birth/Rebirth Show at the
Michelle O’Connor Gallery.

The seminal performance on April 30th will be at least semi-public,
meaning there will be an audience who will be, among other things,
energetic co-conspirators. Using heartfelt intention and planning with
radical temporalities, and with collaboration from others, the ritual
will be created specifically to foster conception and pregnancy on the
potential mother’s own terms.The Availabilist aesthetic will be in
heavy use, as well as aspects and themes of explicit sexuality,
community genesis, avant-garde spirituality, queer-whore-art
amalgamation, diffusion of personal shame, and working through fear.
Most importantly, the performance will be replete with love. Sadie
will be assisted by “Handmade-ins” the group of queers, whores, and
artists who will deliver the genetic material, facilitate the ritual,
and act as holy lovers.
Posted by Madison Young at 1:41 PM No comments: 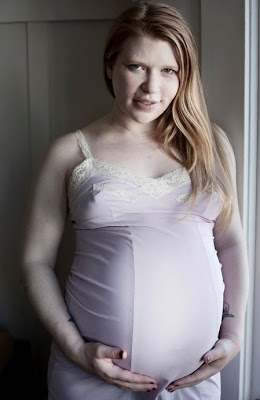 
Porn Star, Sex Educator, and Kinky Mama, Madison Young, delves into the topics of Sex, Pregnancy and Motherhood. Madison divulges her personal secrets on how to keep things spicy in the bedroom through pregnancy and finding the time for intimacy once your bundle of joy arrives. She'll talk about sex positions that work for every trimester, how to safely engage in kinky sex during all points in pregnancy, how to use your sexual & body awareness during labor, uncovering the mystery of orgasmic birth, and how to find time to nurture your sexual center when you are nursing more than playing Naughty Nurse. Madison will guide you through how to embrace your pregnant goddess body and how to feel your best and sexiest as a mom and mom to be.
Posted by Madison Young at 1:28 PM No comments: